Sharing the same year, 1926, with other luminaries like Jerry Lewis, Fidel Castro, and
Marilyn Monroe, Delbert Raby was born in his parents Grass Valley home. Del ended up
being raised in Chico and his character was formed from his parents nurturing, service-
oriented lifestyle centered around their Salvation Army ministry. “Doing the Most
Good” was his family’s guiding principle.

Del began his college education at Chico State in 1944 as a Forestry major with
a Business minor.  As a freshman at Chico, Del and three other pledges of a local
fraternity decided to start a new fraternity which did not include on-campus initiation
and named it Lambda Pi. When Del turned 18 at Chico, he left school to join the Army
to service his country in World War II. When the war ended and Del was discharged
from the Army, he returned to Chico State and completed his education with a degree
in Youth Services.

With his new degree, Del achieved his goal of working and serving for the Boys Scouts
of America. Wanderlust got a hold of Del and soon he was in charge of Boy Scout camp
programs in southern California, including Catalina Island’s Cherry Valley jewel. His
assignment areas included northern California’s Stanford Area, and his longest standing tenure was at Camp Oljato on the shores of Huntington Lake near Fresno California. Del spent his entire career working in various management positions with the Boys Scouts. Additionally, he was very active in local Rotary organizations and served in
various leadership positions.

Three years ago, four scouts who Del mentored as counselors at Camp Oljato returned
to help Del celebrate his 90 th birthday at his Rotary Club. Each scout described a
different dimension of Del’s leadership style.  Unanimous was their consensus on Delbert’s integrity.  They also described Del as gracious and compassionate, while at the same time confident and demanding, Del led by example and he inspired commitment.

His career as a Boy Scout executive kept him committed to the welfare of youth. Other
contributions to his community included the Santa Rosa Symphony Committee and
service as docent at the California Museum of Art. He and his wife Harriett were both
Paul Harris Fellows and shared a hobby of weaving. His other hobbies include golf and
archaeology. Lambda Pi Fraternity is blessed to have a mentor and founding member in Mr. Delbert Raby, an honorable man. 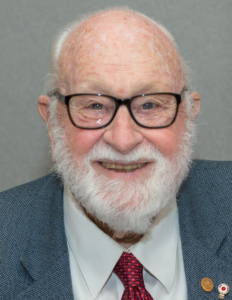 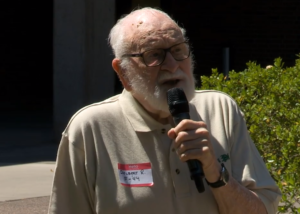