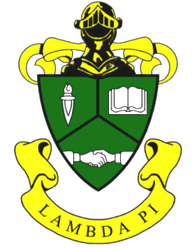 Lambda Pi was formed on the campus of Chico State in the Fall of 1944 by Don Greene, Harry Estes, Wayne Gaskill and Delbert Raby. These four men were pledging the only fraternity on campus at the time and decided to leave and form their own fraternity because they objected to the required public initiation of pledges on campus.  Eight other men joined them to form Lambda Pi: Ed Chew, Bill Fisk, Harry Humes, Jack Turner, Bob Herbert, Vic Brownell, Marty Wood and Dick Hinton.

During ‘Hell Week’ while their former fraternity was initiating their pledges publicly on campus, Lambda Pi pledges wore a coat & tie on campus with a Lambda Pi name badge and all initiation activities occurred off campus.  This action gave Lambda Pi a positive image and was the main catalyst for its rapid growth and acceptance on campus.

A constitution for the new fraternity was drawn up and presented to Dr. Aymer Jay Hamilton, then the president of the college. The original advisor was Dr. Hal Draper and the first president of Lambda Pi was Don Greene.

Of special note:  In 2004, at the dedication of the Lambda Pi Bench on campus in honor of the 60th anniversary of the fraternity, three members of the original 1944 class were present:  Delbert Raby, Vic Brownell, and Harry Estes.  In a recent discussion with Delbert Raby, he related that in 1944 there were few males at Chico State (around 50) due to the war, however there were several hundred women.  Unfortunately, Delbert joined the Army in Feb 1945 and left all the women behind until he returned to Chico in 1947; he graduated in 1950.  Delbert plans to attend our 70th anniversary reunion in May.