Since Lambda Pi's beginning, we have had four houses

This was the first official house of Lambda Pi.  It was built in the early sixties by the actives using the alumni money and land.  The outside framework is designed after the letters Lambda and Pi.  It slept forty actives and pledges in dormitory style.  This house was equipped with a pool (which is in the same of a Lambda), recreation room, industrial kitchen, walk-in refridgerator, and sat on two acres.  This 10,000 square foot building was the most modern fraternity house on the west coast when it was finished.  The fraternity resided there fro five years (1962-1967).  The main reason for leaving was the fact that the actives did not want to live dormitory style.  Elma was the cook at Oak Park. 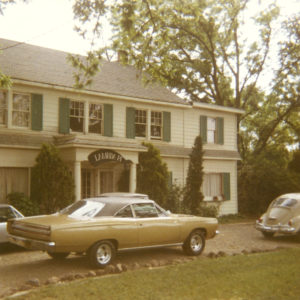 This house was bought in 1968 by actives.  The members pooled their dues money and put it on the stock market.  A good bit of luck produced enough money for a down payment on an American Colonial house at 1133 Sacramento Avenue.  this house sat on two acres, had seven bedrooms, a circular driveway, and crud room upstairs.  The hosue burned down under mysterious circumstances on May 5, 1975.

Was built in 1902 by the White family and is a registered historical landmark known as the “White House”.  It is a Dutch style house, sitting on a quarter of an acre, with six bedrooms and two baths.

The profit from the house was later used to help purchase the Cedar Street House.  Also in the Fall of 1999, Lambda Pi received non-profit status and began funding scholarships for Chico State students beginning in the Fall of 2000. 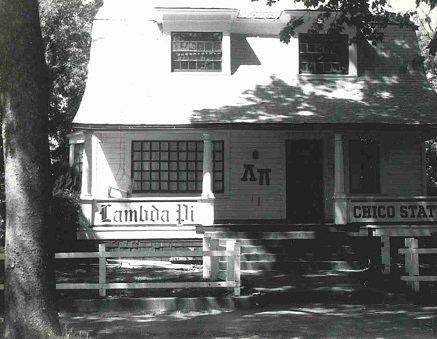 A reinvigorated alumni group established in Fall of 1999 took the $130,000 profit from the Third & Ivy house sale and raised another $70,000 through alumni donations to purchase a new house at 432 Cedar.  Located near the corner of 5th and Cedar on the same side of the railroad tracks as the Oasis, the house was painted appropriately green and white and dedicated in 2000 as the Lambda Pi Fraternity House.

The active group rented the house from the alumni association and received a great deal of support from alums.  A special note of thanks to the alums who donated significant monies to purchase the house and gave personal time to support the active group and new house.

Unfortunately, after a few years the active group began to experience problems:  society, the “University” and the Chico community’s attitude had changed towards “Greeks”– all impacting and changing the experience of being Greek at CSU, Chico.  Consequently, the active group notified the alumni association members would no longer live in the house.

At the May 2007 annual meeting of our alumni association, the members present voted overwhelmingly to dissolve the active group and turn the house into a non-fraternity student rental property.  Since 2007, the house has been a rental property producing a positive cash flow for the Association.